Banks must report money returned due to floor clauses

To apply Royal Law-Decree 1/2017 that protects customers in terms of floor clauses, the commission created for that purpose in the Congress of Deputies has already begun to meet. 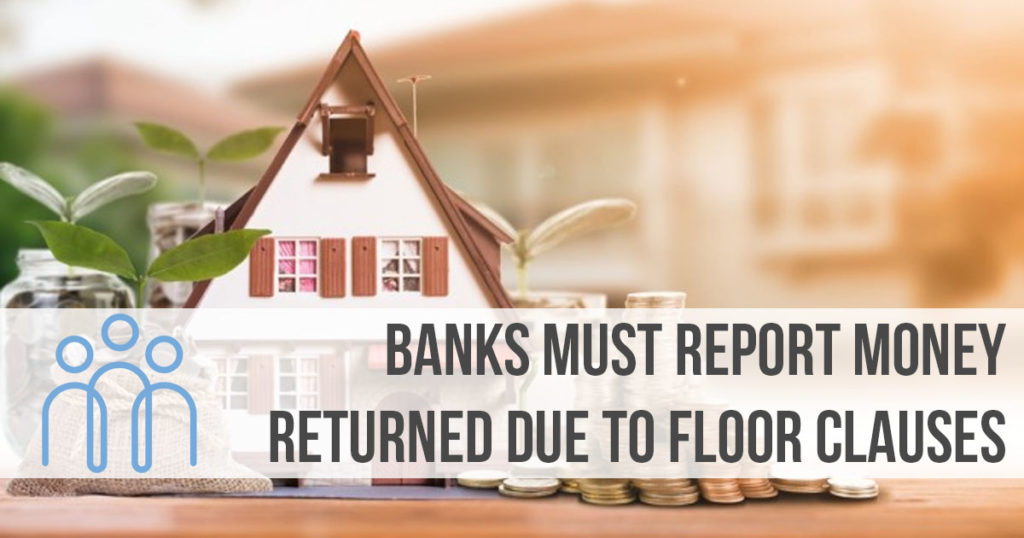 This new body has already started to discuss “the information to be gathered from credit institutions” to verify that in fact the Royal Decree is applied.

The result of the first meeting of this commission in charge of protecting the rights of consumers affected by the collection of floor clauses, was the following decision: financial institutions have until November 6 to inform the number of applications received (accepted and rejected) concerning the refund of the unduly collected money.

About the Decree related to floor clauses

The regulation states that banks must inform their customers affected by floor clauses about “the existence of the procedure, so they can decide whether to apply for it or not.”

In this first communication, it is not necessary for the bank to “quantify the possible amount they would be entitled to receive,” but to clarify to the customer that they can initiate an extrajudicial proceeding to claim such amount if they consider it convenient.

The first transmission of data, whose deadline is November 6, 2017, must include information as of September 30, 2017 about the monthly data registered to be sent by a supervisor of the banking institution regarding the status of the complaint procedures due to floor clauses carried out by customers, including accepted applications and the agreed refund amounts. In addition, they must report on applications that have not been accepted or have been dismissed.

It is also important to receive information about the cases in which the bank “has presented a compensation proposal to the customer, but it was rejected.”

Banking institutions must also inform the Commission before October 31,2017 regarding the system used to “guarantee communication” on time with customers whose mortgage loan includes a floor clause, especially regarding vulnerable people.

This body is going to meet again at the end of November to evaluate the information received until then (which has been described above) “to prepare the report to be submitted semiannually to the Committee on Economy, Industry and Competitiveness of the Congress of Deputies.”

It is worth mentioning that the Royal Decree established “an extrajudicial channel to reach agreements between the customers and the bank” as far as floor clauses are concerned.

That means that the banking institution can make its first offer in cash, but it may be able to reach an agreement with the customer, and settle for different compensatory measures such as the renegotiation of the contract they had until that point.

Part of the commission will be responsible for closely monitoring the efforts of banks to return this money to those affected by the collection of the floor clause, so each month financial institutions will have to offer information on accepted applications, number of claims that the bank has rejected, compensations rejected by those affected, and reimbursements agreed with the clients.

The Royal Decree was approved by the Council of Ministers to protect consumers affected by the fraud of floor clauses materialized in the country, as it was included in contracts and mortgage loans signed.

The complaints due to such action by the banking entities, called for the implementation of urgent measures of protection for these people to whom variable and not very transparent interests had been charged.

This is how this body was born to be “in charge of the monitoring, control and evaluation of the extrajudicial system” with the objective of speeding up the process of requests for reimbursement of the money charged by banks due to floor clauses, a “contractual figure already declared abusive by Spanish and European Justice.”

This commission has suffered attacks from associations of consumers who do not trust the progress it has made: “We will not serve the Government as a silent partner to whitewash banking institutions,” said Rubén Sánchez in a statement as spokesman of one of these groups (Facua).

An important opportunity is now open through a Royal Decree to reach out to thousands of people affected by the inclusion of the floor clause in contracts and mortgage loans they have subscribed. Although the text of this regulation is not clear enough, it states that banks must provide information about the possibilities of claiming to those who feel affected or that the latter can voluntarily address them to demand their rights.

She specialises in companies and freelancers, tax regulations concerning foreign employees (Beckham Law), non-resident tax, inheritance tax and Spanish income tax. She is one of the founders of Tejada Solicitors which comprises a group of English speaking solicitors, economists and architects.