Important discounts are contemplated for the 2017 IRPF tax return

The agreement between the Treasury Department and the political party Ciudadanos is already exhibiting results, since this is an aid to certain taxpayers (groups that are more vulnerable and with lower incomes). This measure would start with low and vulnerable incomes and then extend the measure to the other groups. 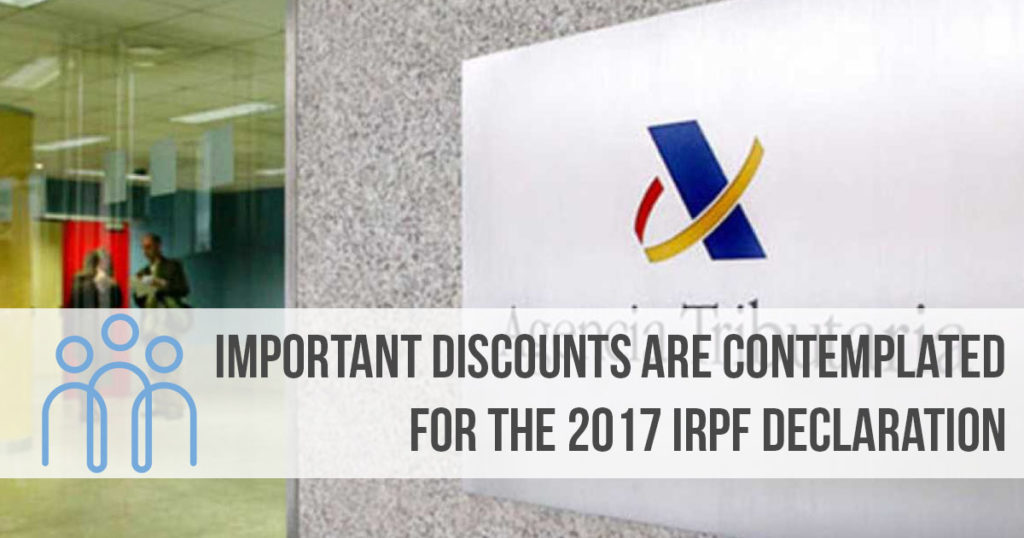 The aid could be managed under the figure of reductions in earned income to benefit taxpayers whose income is less than 18,000 Euros (ceiling not yet defined), and those taxpayers with incomes lower than 14,000 Euros would be exempt from paying taxes.

The details of the agreement have not been designed yet, but at least a political agreement has already been reached to reduce taxes, a proposal brought forward by Ciudadanos, which will continue to be discussed in time for the negotiation of the General Budgets of 2018.

So far, the Government has only acknowledged the approval of the “decreasing” IRPF (Income Tax Return for Individuals for its acronym in Spanish) reduction, “for incomes of up to 17,500 or 18,000 Euros.” Without other details that are expected to be defined over the next meetings of the negotiating team “to approve the objectives of stability,” and from there, begin to analyze each of the measures considered in detail.

Those who promote the measure estimate that about 2.8 million taxpayers with incomes below 17,000 Euros “will save on average about 500 Euros a year.”

While the finance technicians estimate that “the cut of this measure will exceed 750 million Euros,” another 830 million must be added since that will “benefit 750,000 people with spouses with disabilities in charge, elderly ancestor in charge, and an additional deduction for the fourth child, who could get a discount of 1,200 Euros on average.”

The technicians also indicate that “another 1.6 million taxpayers with income between 14,000 and 17,000 Euros will get an average saving of 250 Euros.”

However, taxpayers benefiting the most are those who earn 14,000 Euros, as they would save about 700 Euros (which may vary slightly considering personal and family minimums). Regarding these topics, you could be interested on social security payments and fiscal pressure for self-employed

Explanations from the Treasury Department

Cristobal Montoro, Minister of Finance, said that this is not a “general debate.” He insisted that “what we are negotiating with Ciudadanos is a first phase of reducing the IRPF.”

Additionally, he indicated that the “general reduction will come when Spain manages to get out of the excessive deficit procedure,” an objective that Montoro says will be fulfilled in 2019, when the country is able to reduce its public deficit to below 3%.”

A more detailed and complete tax reduction is expected at the end of the parliamentary term to be included in the 2018 budget.

Meanwhile, technicians from the Treasury Department explain that this reduction measure in the declaration risks “meeting the deficit target of 2.2% of GDP in 2018.”

If you live in La Axarquía, in municipalities such as Benajarafe, Canillas de Aceituno, Competa or Torre del Mar, you can contact us for accounting or solicitor services related with taxes in Spain and how to do your IRPF declaration.

Summary
Article Name
Important discounts are contemplated for the 2017 IRPF tax return
Description
The agreement between the Treasury Department and the political party Ciudadanos is already exhibiting results, since this is an aid to certain taxpayers (groups that are more vulnerable and with lower incomes). This measure would start with low and vulnerable incomes and then extend the measure to the other groups.
Author
Rosana Tejada
Tejada Solicitors
Tejada Solicitors
Publisher Logo